Where have you been all my life? Brilliant soundtrack (obviously). 2 sexy non-prissy girls as the comedy leads, Riff Randle and Kate Rambeau… PHWOAR! A fascist principal. A brilliant visual joke involving a paper airplane. Riff Randle takes over gym class. Clint Howard playing a proto-Ferris Bueller. A make-out at inspiration point 3 day starter course. Riff Randle queues for tickets over three days. Racist joke. The Ramones arrive in the “Gabba-Gabba-Hey” mobile, Joey eating half a chicken. Riff Randle in red lacy underwear imagines The Ramones are performing in her en-suite. A plush seduction van. A humanoid mouse turns up at the concert. 20 minutes of concert footage with non-cooperative Ramones fans extras. Joey Ramone says the name of the movie like he is speaking a foreign language. The school is taken over. The humanoid mouse’s mom shows up. KA-BOOM! Daft, cartoonish shenanigans.

Franc Roddam directs Phil Daniels, Leslie Ash and Mark Wingett in this Mods versus Rockers teen drama based on an album by The Who.

It starts grainy, grim and gangly… making facile points, with unfocused unlikeable characters, played with an amateurish roughness. But it gets better… the Brighton riot sequence really throws you into the action and the closing stretch of alienation and dejection is captivating. Maybe as finally The Who’s music dominates the soundtrack after 90 minutes of teases and whispers. Maybe as Phil Daniels’ inarticulate tough, wanting to rebel, wanting to belong, finding no solace, gets to react silently to reality. My Dad loves this film… it is his era recreated and filmed around his old Shepherd’s Bush stomping ground. Even telling him on the phone we watched it again inspired him to tell us about a fight he got into at a pie mash shop used as a location. While lacking Tommy’s shamanistic power, there are inspired touches. Showing the epilogue to the ambiguous final shot at the very start, Sting’s dancing and any bit with podgy Ray Winstone. “Don’t matter who you are or where you go. There’s always some cunt with stars and stripes on his arm telling you what to do!” SMASH CUT “Quiet please!”

Greg Berlanti directs Nick Robinson, Logan Miller and Katherine Langford in this teen romantic comedy about a gay lad who is forced “out” when he begins communicating with another anonymous boy from his school.

Love, Simon is a safe and neat teen flick. In fact, what is most impressive about it is it deals with a teen coming out, his emotions and feelings, within the brisk, personality-lite, faded primary colour mode of any other mid budget studio teen movie of the last decade. To have a toothpaste commercial looking kid and his Patagonia model looking mates go through his standard product adolescent love life normalises the tumultuous feelings a unrepresented minority of children must go through. I get the inkling that in the long term Love, Simon will be a more important film for young gays, bis and questionings than say Call Me By Your Name. While both are idealised fantasies of high income living, one is a summer romance so prestigious and nostalgic as to be unattainable while Love, Simon at least looks and talks and posts and blands in a way a 14 year old kid might find recognisable and relatable. Which is not to say it is a great film. It lacks the wit of say The Duff or Edge of Seventeen… only the teachers get anything resembling a good line (MVP shared between Tony Hale’s gawky Vice principal and Natasha Rothwell’s stupified drama teacher). Equally there’s none of the artistry or rawer emotions of Lady Bird or The Spectacular Now. It seems quite content being a xerox of a John Hughes movie. Apeing the aesthetic and sounds of a three decades old creative to lend this relatively toothless confection an air of quality. And this sadly is where Love, Simon fails within its modest aims. Simon and his mates in their sneering rejection of outsiders, their car shares, gossiping, million dollar homes, and iced coffee binges feel more like the Blanes and the Steffs than the Andies and the Duckies. Simon lies to and manipulates his friends (albiet for a mixture of selfish self-protection and vague nobility) and even tries to change the dorkish villian by telling him not to show any of his personality or tastes. Even the unsubtle blackmailer knows he still needs to be himself. He wants to be himself, just not ignored by the cool girls. I’m not sure whether the troubling ramifications of that moment are entirely intentional. Have we just acknowledged that Simon’s gang would rather only be with their own handsome yet unthreatening clique rather than accept the loud, over confident geek on his own terms? Just look at their continued passive pity staring at the actually bravely out, effeminate gay kid. Are we supposed to like these semi-skimmed jabronis? And as for the romance aspect… there isn’t one. Two anonymous voices guessing who each other might be, while a solid plot concept, sadly doesn’t a hot connection make. Sure, they share a moment of forced intimacy together at the very end but we have no investment as to whether Simon and his “Blue” will have any kind of sexual relationship after the credits roll. Even mismatched Bender and Claire would have had a one-off, hot and heavy weekend after their Breakfast Club get together… I’m not sure how much I care about bland coward number one and bland fibber number two hanging out a bit more after so little physical contact. Given the conceit, maybe Sleepless in Seattle might have been the better movie to crib from? 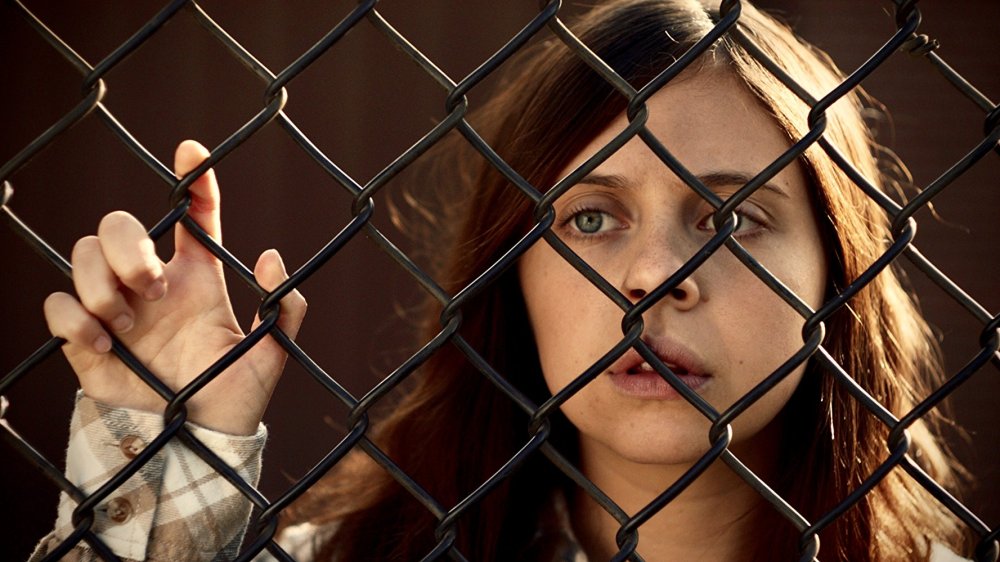 Fritz Böhm directs Bel Powley, Brad Dourif and Liv Tyler in this horror romance about a girl kept in captivity in the woods as an ageing hunter thinks she will turn into a wild beast.

A movie that never once submits to a boring shot or cut even if it slightly outstays its welcome by the end. There’s a brilliant central turn by Ann-Margaret as Tommy’s equally disconnected mother, frames of showgirls in gas masks and that brilliant The Who soundtrack. Tommy is an acquired taste for sure, of its time and wilfully nonsensical, but the sheer power of the imagery generated from the rock is undeniable. It also has four or five genuinely unsettling moments in the lengthy sequence of Tommy’s corruption.

Fred F.Sears directs Bill Haley & His Comets, Johnny Johnston and Lisa Gaye in this rock showcase movie that explores the “birth of the scene” with a framing love triangle and performances from The Platters and Freddie Bell & His Bellboys.

The framing romance, where a sharp band manager tries to navigate himself between a savvy young dancer and a manipulative tour booker, is neat in its relative sexual frankness and the fact the ladies have the upper hand. But you haven’t come for that, you’ve come for the music and there are loads of great performances here – whether they be in village hall sock hops, Alan Freed’s nightclubs or Hollywood concert venues. This footage is fantastic, giving this cash-in cheapie a long spanning afterlife it is hard not to get caught up in. 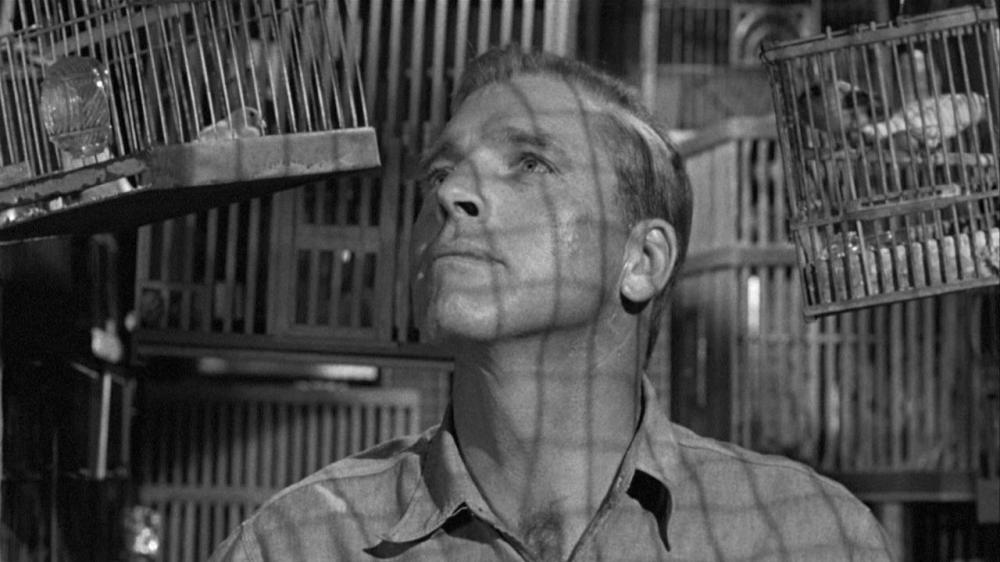 John Frankenheimer directs Burt Lancaster, Karl Malden and Telly Savalas in this stark prison biopic of Robert Stroud, a brutalised man who begins to care for birds and study their health from his isolated cell.

A fine, worthy biopic that transcends a lot of its unavoidable cliche through the dynamic performance of its star. Lancaster truly transmogrifies himself on screen from his normal proud, manly fighter to a sensitive, unbroken elderly man. The length and claustrophobia of the setting may be a little off putting, as does some of the whitewashing of the real Stroud’s continued criminal attitudes, but this is one of the last great black and white films.

I remember this being a silly jaunt when I went to see it on release… and it still is. OK… so a lot more attention has gone into lavish set design than script and the soundtrack of big beat dance bangers lends an energy that the actors lack. There’s a couple of fine sustained action sequences, the stand-out being a bungee cord shoot-out around the Croft mansion. It is all cartoonishly passable. While the recent reboot wants to appeal to empowered young women, this had its sights set firmly on adolescent boys. Jolie fills the tight tank top and shorts curvily. Her cushiony sheen proving unthreateningly buxom for “the lads.” I’ll confess I’ve never really understood her high regard (aside from her admirable charity work) by audiences and critics. Her best film is the slightly above average Mr and Mrs Smith, a film that shares this blockbuster’s throwaway bouncy carnage and dress-up pouting. And though undeniably gorgeous, her default physical stance looks like a velociraptor who has been unwittingly transported into a smooth, hourglass shaped flesh suit. Her repetillian scanning of the room after each action salvo or line read resembles an out of place, confused leering predator that I find uncomfortably alien.

A taut and engrossing procedural that serves concurrently as an appropriate vehicle for Clint. The world of Alcatraz is illustrated with sparse elan, the effort and cunning put into the escape presented with little fan fare. There’s only one playful moment of embellished trickery and Siegel’s masterfully patient framing becomes a little more frazzled the closer to hard fought for freedom we get. Did the real escapees make it out? I’ve still no idea, despite a recent letter and photo suggesting so. Is this as compelling as the similar gruelling grind presented in Le Trou? No, but it’s a solid stab at the same emotions.

Thomas Vinterberg directs Trine Dyrholm, Ulrich Thomsen and Martha Sofie Wallstrøm in this drama about a Danish family who open up their home to communal living.

A wry and well realised drama that focuses more on a break-up of a family than the amusing politics of communal living that serve as the back drop. It is perfectly cast and sensitive to all characters yet, somewhat inevitably though, a little inconsequential. Reminded me of The Ice Storm in more than just its shared period aesthetics.