Clearly Netflix decided this was going to be rebranded “The Irishman” and Marty was having none of it. The title card reads I HEARD YOU PAINT HOUSES at the start and at the end and in years to come that will be the name that sticks. We have a long stretch of cinema on our hands here. Three hours thirty. The first two hours fly by, the final act is a patient procedural of a conjectured historical event and then we get a very generous 30 minute epilogue following an old man and his regrets. Like Goodfellas’ penultimate shot of Henry Hill becoming a suburban mope elongated. Times 600. Or a mirror image of the closing moments of The Godfather. Instead of seeing a door close, excluding us from the secret world we have glimpsed and been seduced by, we are left with an open door, a man alone in darkness, full of stories he doesn’t want to speak and there’s no one left to listen. Bereft by his part in history. Tragic. If you watch it on your glowing tablet you are gonna want to pause and episode up these final dwindling sections. Don’t. In the cinema your patience, bladder and knees are tested by the brave midway slow down over such an unusual running time but the overall effect of watching it in a oner is incomparable. You feel like you’ve witnessed something. Something unrepeatable. You appreciate being trapped, locked in to the whole rather than convenient chunks.

Those first two hours might just be Marty and Thelma’s finest filmmaking in a 50 year career of greats. The story flows with a classical confidence. There’s only three or four scenes with any of the experimental verve and energy of Raging Bull or Bringing Out the Dead. This is the Scorsese of The Aviator or Silence lending that maturity and beauty and unfussiness to the gangster genre he already reinvented and redefined twice. The young man who made Mean Streets would be enthralled to see his world go painterly and platinum, his vision have clarity and elegance. All punk spunk has gone, we are left with smooth yet complex yarn spinning and oodles of character space.

You need the very best actors to fill that space. Look at that top line cast. Did you ever think you’d see them work together again? DeNiro washes away decades of cheap paycheck plays with a quiet, domineering anchor point turn. Pacino hams it up, but in a charming, avuncular way. His Jimmy Hoffa is a seductive old blowhard. I’d be a teamster on Jimmy’s ticket. The quotes come from him. The rest of the cast is rounded up from Scorsese’s quality TV projects; Boardwalk Empire and Vinyl. His HBO finds. Stephen Graham, Ray Romano and Bobby Cannavale all impress among the heavyweights, new legends among old. All of them carry the drama and hit plenty of dark laughs. It is a nimbly funny film too, if you like your humour black.

Man of the match though has to be Pesci. Playing a softly spoken criminal wiseman. An adjudicator, as much as an enforcer. There’s a perfect scene early on in an bowling alley and then another later at Christmas were we see the warped humanity of the man. He realises one of Sheeran’s young daughters sees him for exactly what he is. A corrupter, a thug, a murderer, a danger, a threat. He cannot win her over with gifts, money, smiles, affection or compliments. The sadness in his eyes that he knows she is right, and he can’t have a true relationship with an innocent is a never seen on screen before thump. A blow. You feel his pain, a new pain for us gawking civilians. The idea of not being liked by the pure, the prescience of the uneducated and unjaded child knowing your reality. He carries these scenes and the later bigger, showier ones with a self-awareness and dignity, a silent power. Amazing stuff.

Now the much talked about CGI de-aging FX aren’t perfect. The first scene in the harsh light of day feels like a cut scene from a PS4 game. After that, in the one lamp hotel rooms and after hour bars, you notice it less. It only takes you out of the film every 15 minutes or so. DeNiro’s eyes sometimes are ghostly, like there’s nothing behind them, not even skull and hair beyond the space. Maybe that’s how Frank Sheeran wants to remember these incidents. Maybe there’s a forger’s note to the fantasy. Maybe I’m making excuses and they should of used younger actor and prosthetics. Either way it isn’t the deal breaker you’ll think it would be. I watched this on the big screen. The flaws can’t hide. It didn’t detract from a brilliant piece of filmmaking. This is a brilliant piece of Scorsese filmmaking. If you love JFK or The Godfather Part 2, you’ll love this. To reach a strange precis, it is a true crime Forrest Gump. Taking an unspectacular man through modern history, using con shots to realise his brushes with the significant events. This guy’s smarter than Gump, he had no heart and he’ll blow your brains over the wall. That’s America.

I watched this many times as a child and (until this Sunday) zero times as an adult. There’s a wondrous cast shuffling around about 45 minutes worth of plot with dated slapstick added into every scene to stretch out the first act of a proper film to a rickety feature length. Salkinds movie economics. Never dull, just very corny. The defining feature of 17th century France would appear to be clumsiness. Any moment with Oliver Reed is fantastic, Athos is the role he was born to play. The slumming it A-List leading ladies sport their cleavage and beauty spots gorgeously. The villainy is boo-hiss worthy. York makes for a sweetly wooden lead, he’d be as at home in a Carry On as he is in period intrigue. It could have more duelling, certainly more Musketeering. The filler silliness is overwhelming. And yet my soft spot for it remains.

Richard Shephard directs Allison Williams, Logan Browning and Steve Weber in this… I don’t genuinely know what it is…. it involves cellists and mania and stalking and twists and revenge and twists and a virus and twists and sexy lesbians and… look… just a lot of stuff…ALRIGHT?!

Direct to Netflix – in the best and worst possible ways. Absolutely mad, starts out like The Hand That Rocks the Cradle, then within seconds becomes a musical lesbian Lost in Translation and suddenly we are all backpacking in the wilderness with a particularly gross killer virus rearing its yellow vomiting head in the wing mirrors… Does it settle into a coherent plot or genre then? No. Not for one zany minute. You eventually think it is trying to be a particularly unhinged variation of Nolan’s The Prestige with cellos replacing magic tricks but… still… no. A deranged eel of a film. As long as you don’t try and grasp it or hold it down it is morbidly fascinating watching it squirm about in loops and thrashes. Sexy junk food or a misunderstood work of true genius, I promise you this is currently someone’s favourite movie ever. Just not mine. Whoah!

Ingmar Bergman directs Nine-Christine Jönsson, Bengt Eklund and Mimi Nelson in this melodrama about a promiscuous and lonely reform school girl who falls for a sailor.

Tom Harper directs Felicity Jones, Eddie Redmayne and Tom Courtney in this (not very) true story about a grieving hot air balloon pilot and a plummy weather scientist who flew higher than anyone had at that Victorian point of history.

Felicity Jones is superb in this as a theatrical “man of action”. Her gruelling set pieces are immersive and she is thoroughly seductive presence. Gaudy on the ground, knee slapping in the air, reserved with her dark emotions. Why she shares equal billing with defrosted Dean Gafney here, I have no idea? A grating, sodden presence who sits the spectacle and stunts out and has little to offer the forced narrative. He detracts from this particular film, I certainly have never seen him benefit any other ones. Posho kryptonite. A wet distraction. This has a nice look, like a coloured over monochrome picture plate in a story book. Cruikshank and crayons. Harper’s plotting choices are bland and trite, his sense of the epic vibrant. A visualist with better taste in leading ladies and plummeting silk than actors and gassy flashbacks. 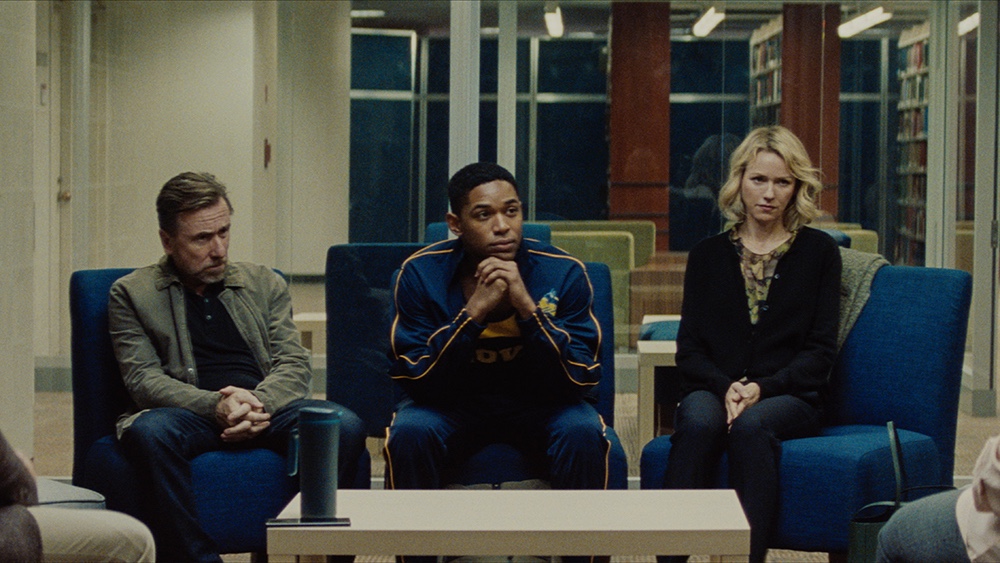 A difficult film – erudite, risky, unpredictable. It does feel stagey – the source material is a J.C. Lee play. Is it a thriller? A teen drama? A didactic discussion about race? Obviously it can be all three at once yet, like it’s eponymous protagonist, you never feel like anyone has a proper grip on what Luce is. This slipperiness can be a power. Luce shares a lot of DNA with Highsmith’s Ripley and John Guare’s Six Degrees of Seperation. I liked it but Luce the movie isn’t an easy digestible experience, it certainly feels a little more academic than satisfying.

David Miller directs Kirk Douglas, Walter Matthau and Gena Rowlands in this modern Western where an independent cowboy finds himself on the run and at odds with the system.

Jack Burns is asleep in the wilderness. He is breaking in a new horse, Whisky, who still does not like the saddle, needs his legs shackled overnight. They head into town, two gentle rebels. En route Jack’s path is obstructed by a new fence and a busy road -the latter Whisky doesn’t want to navigate. Jack (a resplendent Kirk Douglas in maybe his best role) finds himself constantly butting against the new America, trying to cage him in. It’s lack of freedoms that used to define it, it’s attitude to grind out non-conformity and heart. Eventually Whisky and he are on the run. Pursued by sheriffs, helicopters and the future. Thrilling action, fine acting and a nice Dalton Trumbo scripted message about the Land of the Free. Would make a fine double bill with Junior Bonner.

Ken Loach directs Kris Hitchen, Debbie Honeywood and Rhys Stone in this drama following a delivery driver trying to hold is family together after he signs a contract that affords him very few rights.

A lacerating attack on the realities of the gig economy. This had me on the verge of tears at times. I know what is presented is the worst case scenario; extreme bad luck, heartless boss and family drama… but that is why the safety net of rights exist, of legally prescribed maximum hours, worker’s directives and statutory sick pay. For middle class people, they’ll watch this and think “Something should be done…”, for working class people they’ll recognise a nightmare situation that feels like something that could be more and more prevalent over the coming years. “Something should be done…” and that will be that for most people. The Bicycle Thieves for the 21st Century. 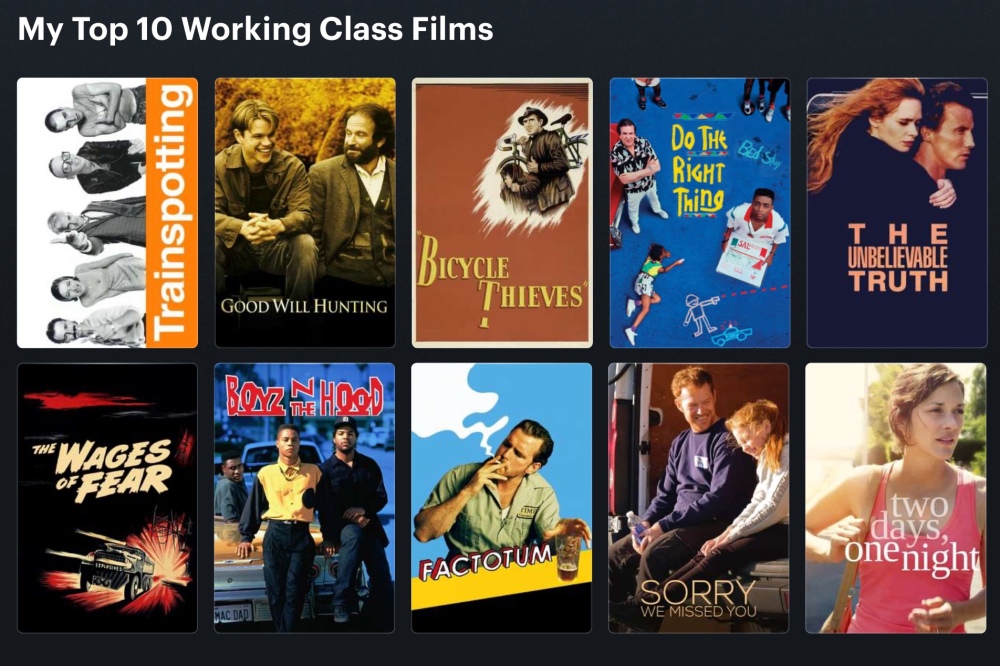 Luis Llosa directs Jennifer Lopez, Jon Voigt and Ice Cube in this adventure thriller where a documentary crew in South America are hunted down by a giant snake.

Never boring, never good. It hurtles between adequate and awful like a kid with a dead leg doing a bleep test. Sometimes the snake convinces, most times it does not. Sometimes Jon Voigt’s ACCENTED baddie if cheesy value, most times it is a once great actor pulling a weird face. And yet behind Out Sight, Hustlers and The Cell this somehow houses J-Lo’s fourth best performance.

What starts out as a thrill kill turns into a very Grimm fairy tale. Lust turns into inadequacy and revelation. A crime spirals into increasingly nightmarish repercussions. You don’t massively care about the characters but the journey is unpredictable enough that you stay invested.