Nicholas Ray directs James Dean, Natalie Wood and Sal Mineo in this teen drama about kids putting themselves in tragic situations out of boredom and frustration at the inevitable compromises of approaching adulthood.

The kids keep praising “sincerity” but that’s hard to do when one henpecked Dad wanders around in a floral pinny, another can’t show his daughter affection for fear it’ll translate as sexual desire and yet another has long gone. Best just drink, knife fight and race cars off cliffs into oblivion. Glorious technicolor oblivion. Amplifying the primary red, blue and greens of the teenagers fashions the whole thing looks like a fantasy. Obviously this is short lived Dean’s most iconic role – the rebel, the sensitive tough. He is fantastic… but everyone here is. Delivering dialogue that reaches for truth and connection but is full of anger and compromises. Smart melodrama, cool vision. A timeless classic.

Ben Wheatley directs Brie Larson, Sharlto Copley and Armie Hammer in this claustrophobic action farce where a gun deal in an abandoned factory turn into a prolonged shoot-out.

Given his perfect track record I had high hopes for Ben Wheatley’s first “American” film (it was mainly filmed in Brighton and the cast is more international than a Peruvian hostel). So slightly disappointed that Free Fire is a daft, throwaway amusement which after a while get stuck in the rut of prolonged bullet exchanges, non lethal leg wounds and dusty crawling. That’s the gag, I get it, but there’s often a lack of surreal spectacle or shock spunk to it that Wheatley normally includes as standard. As well packaged and knowing as it all is, there’s nothing here you haven’t seen before. And what Wheatley and Amy Jump have made their names doing previously is always taking you to places you didn’t know existed in the movie theatre. There’s still plenty to enjoy; Copley (endearingly repugnant) and Hammer (ridiculously cool) have a 90 minute dance off of scene stealing moves. Larson and Cillian Murphy have a nice chemistry in their quickly aborted flirting. And some of the deaths are satisfyingly quirky enough and framed well. All in all, a fine, almost nostalgic, five finger exercise.

Richard Marquand directs Glenn Close, Jeff Bridges and Robert Loggia in this courtroom thriller about a lawyer who falls for her client without ever trusting his Not Guilty plea for his wife’s sexually violent murder.

Glossy. So glossy you slide through it without feeling a thing. It passes 90 minutes. Mainly of interest as an early Joe Eszterhas screenplay, it has his swear heavy dialogue (amusingly Loggia’s investigator can’t get through a sentence without adding an unnecessary expletive), misogynistic violence, red herring characters and the worst telegraphed smoking gun in movie history (a broken typewriter). Obviously Close and Bridges are better than this but curiously they don’t really add anything to the rote proceedings.

Frank Capra directs Lionel Barrymore, Jean Arthur and James Stewart in this Best Picture winning romantic comedy about a young couple who struggle to introduce their respective families; a titan of industry and his snooty wife versus a bunch of Bohemian oddballs.

As baggy as an oversubscribed luggage carriage and as dated as the values it simultaneously celebrates and attacks this still has enough Capra lightness to be perfectly watchable. The sequences of smart satire have aged better than the stage farce zaniness. Quirky rather than quality entertainment. 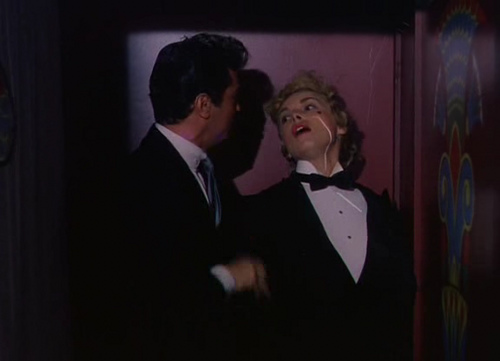 If the doorstop biography I read a few years back is anything to go by this is absolute bobbins, but colourful, utterly watchable bobbins. The real life couple translate that chemistry nicely to the big screen and Curtis performs his recreation of the tricks with an unfakable enthusiasm and showmanship. Fun.

Frustratingly slow and oblique, it often feels more like a long winded pisstake than the leather and axe grindhouse saga promised on the DVD box. Despite arty pretentiousness and a mean spiritedly shambolic pace, the mute lead turn by Mads and some promisingly disturbing moments just about allow this to pass muster. Maybe on the big screen, where you might get more lost in the stark imagery, it wouldn’t appear like quite the grubby middle finger to the watcher.

The noticeable start of the shockingly steep Tim Burton decline, this has the feeling of project done out of boredom rather than passion. A feeling now familiar after a near constant run of uninspired house style remakes and reimaginings. But back then you gave the Burton / Depp powerhouse the benefit of the doubt. It is not a terrible movie. The set and costume design is stunning, Ricci is lovely in her first adult role, Walken puts in a fine extended cameo as the headless and wordless horseman. But for Depp and Burton this feels like ground well trod already and now you know they’d continue to walk back and forth in these deeper and deeper descending mud puddles you just wish they went off route and parted ways sooner. Both talents seem wasted by finding a groove that worked and the only post- Ed Wood endeavour that seemed to create genuine excitement was their awkward but gloriously violent musical sidestep Sweeney Todd. This shares some of that exception’s Grand Guignol excess, but not enough to elevate it to the Edward Scissorhands heyday. Hell, it is not even as fun as Mars Attacks. 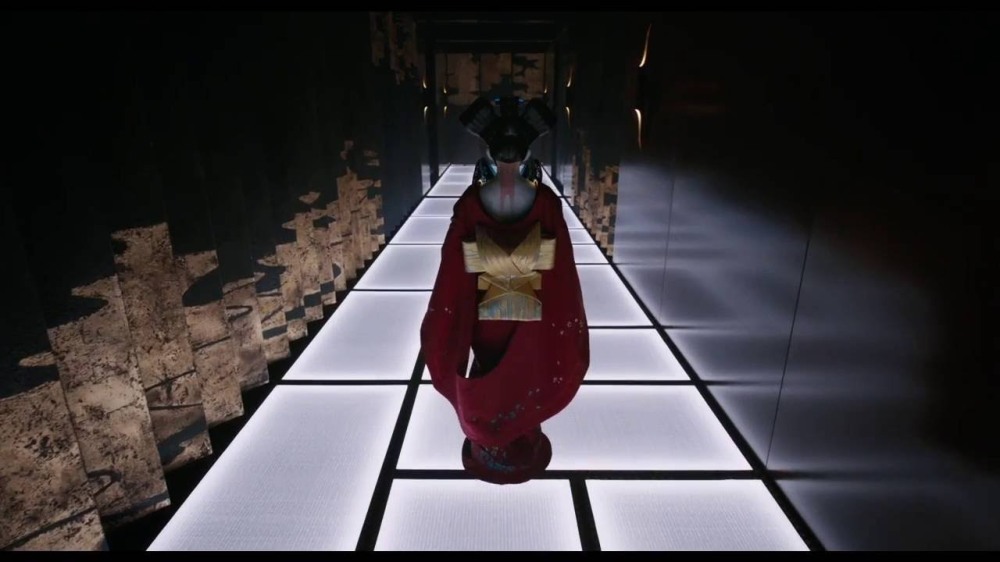 Rupert Sanders directs Scarlett Johansson, Takeshi Kitano and Michael Pitt in this live action remake of the anime where a cybernetic policewoman discovers the company that salvaged her brain may have taken her life.

I found the animated original a very dry plod when I was a teenager, and I was never a fan of The Matrix series which pirated a lot of the code any remake would also need to plunder. But in the Scarlett Johansson dominated marketing build up for this I found myself quietly hopeful, discreetly salivating at the prospect of a big budget, full on cyberpunk dystopian vision. And I absolutely loved it. Amazingly intricate world building, some nastily dark moments of data rape and a great support from the living legend that is Beat Takeshi. Could have done with a slightly longer action sequence when The Major escapes a second act reprogramming (the movie forgets its blockbuster set pieces as the satisfying introspective noir fully takes over) and the FX get a bit ropey in that last Spidertank sequence. But minor quibbles when a film had the rare visual ambition of Blade Runner or The Fifth Element. Ask yourself what kinda cinema you want made for a $100 million? Where do you want your Scarlett Johansson deployed? Superheroes scrapping and joshing in abandoned airport runways or an entire cityscape spewing out neon holograms of robotic consumerism, there to stage your Kafka-esque action mystery in? I know where my tenner wants to go. Ambition, scope, an unforgettable sensory experience.

Steven Spielberg directs Robin Williams,Dustin Hoffman and Julia Roberts in this fantasy where a middle aged Peter Pan journeys back to Neverland to rescue his kids.

I must have watched Hook as a child… must have… yet my only distinct memory of it was a faded poster for its release staying up far, far too long round the back of the Greenford Sainsbury’s car park. Still, it is all a bit shit, ain’t it? Especially considering the pedigree. We spend 35 loooooooong minutes before we even get in sniffing distance to Neverland, with Spielberg photocopying his moments of wonder from better, more inspired blockbusters and Williams being a dullard (albeit with excellent improv skills) around his horrid kids. Then we get to Neverland and it is chaotic yet monotone, ambitious yet flimsy, garish yet hollow all at the same time. The stars all seems to have turned up on different weeks and their footage assembled together on an AVID. The action is sparse, bloodless and lacklustre. The overwhelming amount of sequences with the achingly 1991 vintage, yet charmless lost boys are frustratingly neverending. Julia Roberts sole expression as Tinkerbell looks like she’s done a wet fart in her tights and is smiling to cover up while waiting for an adult to come along to change her. And Hoffman’s Hook is given so, so little to occupy himself with while it all unravels around him… so that it would have been more sensible to call the whole epic fail Smee!… or Steven Spielberg’s Thud Butt. Probably the wunderkind’s weakest, most directionless, least appealing work. They can’t all be winners, kid! I wonder if that poster is still there?

The credits give away the order of who is going to die when, the two monologues of character work feel like they were written on a coffee break and only the final “twist” shot shows any of the inspired nastiness a flick like this needs about ten times of to survive. In fact that closing sting is the kinda sequence a decent thrill ride would open on and tease with in their teaser trailer. All you really get for an hour after the most famous (but also most annoying presence) takes an early bath, is survivors floating from one airlock to another to another to another. Life? Dead clone, more like.