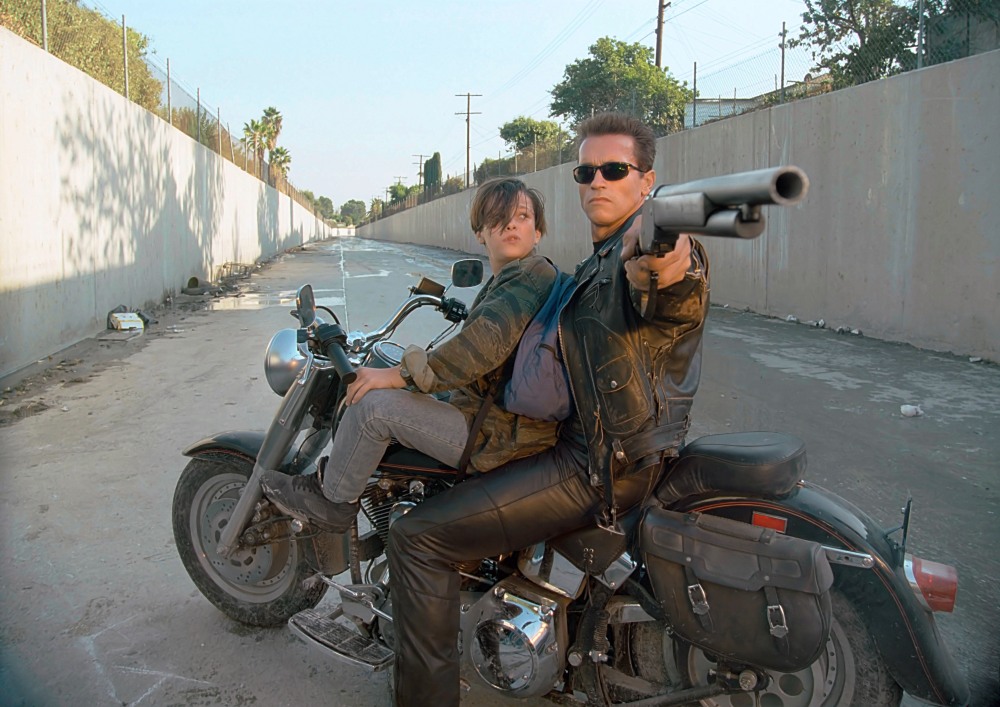 James Cameron directs Arnold Schwarzenegger, Linda Hamilton and Edward Furlong in this sci-fi action juggernaut where the old T-800 model is reprogrammed and sent back in time to protect an adolescent John Conner from an even deadlier robotic threat than his mother faced in 1984.

They only ever made them like this once. And this was that one time. The scale of the mayhem, the clarity of the action storytelling is incredible. Footchases in malls turn into demolition derbies between motorbikes and 18 wheelers truck cabs. An intense and sweaty barefoot asylum breakout becomes a cybernetic horror show. We take complicit part in a terror attack on a corporate lab. Then a highway chase where a helicopter weaves under and over bridges in relentless pursuit of a SWAT vehicle… DONE FOR FUCKING REALS!! Bringing us to the blistering heat of the finale where our battered survivors are navigating a molten lead works with only a few bullets left, knowing the hundreds they have fired into the unstoppable new Terminator for the past couple of hours have barely slowed it. We also, en route, take in a one sided bar fight, nuclear destruction, future war and assassination attempts on a middle class family. This is how you do a blockbuster. Prime Arnie – just amazing. At home in the action, stretching his legs with the “human” stuff in a pleasingly believable way. Linda Hamilton is THE badass, raging warrior mother. No one has even tried to imitate her elemental, conflicted maelstrom since on screen.  And that triumphant score. Makes we want to watch it all over again. Flaws? The middle section heading to the border drags after all that big portion set-piece tasty. And that incongruous “I need a vacation” ad lib near the end should have found the editing floor. All in all though, thumbs up.

Really rather heroic and breezy, easily better than its duff critical reputation suggests. Elba and McConaughey are far too powerful a pairing of genuine movie stars to ever be boring, inspite of the often stoic nature of the dialogue. This fast paced, simple adventure is littered with well designed terrors, elegant visual world building and many winking King references for the avid spotter. The finale unfortunately suffers from the duffers of CGI weightless imagery… but no more than Wonder Woman or Spider-Man or just about anything you bought a ticket to this summer. At a brisk 90 minutes this gets more right than wrong and proves decent big name popcorn. I was thoroughly entertained.

John Schlesinger directs Timothy Hutton, Sean Penn and Pat Hingle in this true tale of an intelligence analyst and his drug dealing childhood friend who start selling secrets to the Ruskies.

Solid acting gets lost in a meandering repetitive plot. The second hour of mistrust and bumbling attempts to recontact the Russians feels like it is stuck in an interminable loop. Maybe that is how history unspooled but a thriller should surely be a bit more targeted.

Patrick Hughes directs Samuel L Jackson, Ryan Reynolds and Salma Hayek in this buddy action comedy where a hitman and a bodyguard team-up.

Please just end. End. End. Why hasn’t it ended yet? Sam Jackson must have said all his contractually required amount of “Motherfuckers” by now, surely. Yet it is still going. And going. And going… End! END! End… motherfucker…?!

Dull, dour and dirty – Richardson attempts to lens just about anything but Jagger as he is such an uncomfortable, stunted presence on screen. Annoyingly he is playing the lead character so on the rare occasion he is forced to enunciate a line of scripted dialogue you feel you are in some kinda feral school nativity play. Awful.

Mark Dunstan directs Josh Stewart, Randall Archer and Emma Fitzpatrick in this gorehound sequel where the survivor of The Collector leads a rescue team into the serial killer’s booby trapped lair.

The first low budget entry was unexpectedly intense, believable and low key. This stumbles greedily the other way and is just nastily sloppy.

I tried to watch this twice before late night (once on Moviedrome as a kid, another time drunk) and each time never made it past the murder. I have robbed myself of a brilliantly orchestrated thriller. Like Travolta himself , it is not a lean experience. There’s a seedy subplot involving a sex killer and a lengthy flashback to a bungled sting that tells us more about the main character than it affects the already in-motion plot. The use of blinding primary colour, deep focus, jarring close ups, movies within movies (Boy Oh Boy, doesn’t the exploitation slasher flick we open up with seem innocent compared to the corrupt “reality” we end up in?) all disrupt you the viewer out of your complacency. The ending is both downbeat and a cruel punchline. Blow Out is DePalma at his most hatefully playful, like Batman’s nemesis The Joker, the violent prank he openly plays is on everyone. Genre movie making is a joke, a trick, and here’s the method, here’s the artifice, here’s the strings. Yet I the director can still hurt you when I pull them the right way. Ow!

Joe Dante directs Dennis Quaid, Martin Short and Meg Ryan in an action comedy about a hypochondriac store clerk who has to rescue the minitaturised test pilot who has been injected inside him.

A summer blast, so full of neat ideas and well executed wonderment that you can’t help but be won over by it. There are about half a dozen movies fighting for dominance here (a Fantastic Voyage update, a Spielbergian Amazing Tale, a paranoid chase movie, a Meg Ryan romance, a Martin Short broad comedy and a Joe Dante live action Looney Tunes jamboree) yet the pace never slips and it rarely tips over into messiness. A busy romp but busy with pointedly entertaining elements. Most importantly for a high concept flick like this the internal FX work is convincingly gloopy and awe inducing while the set pieces, both within and without the body, prove to be consistently kinetic and intense. Add to that some killer use of soul singer Sam Cooke and you have a winner, lacking any rust or wear three decades on.

Kenneth Branagh directs Chris Hemsworth, Natalie Portman and Tom Hiddleston in this Marvel flick about an Asgardian warrior god prince banished to Buttfuck, USA for his half brother’s plotting.

Some glowing design work in Asgard and Hemsworth’s nice line in hunky doofus heroics aside there’s very little to actually revisit on a second viewing. Essentially a muted, tasteful version of Dolph Lungren’s Masters of the Universe with franchise building when there should be action (Take the shot, Hawkeye!) and no real pace or commitment from the paycheck players. The Marvel machine at its weakest.