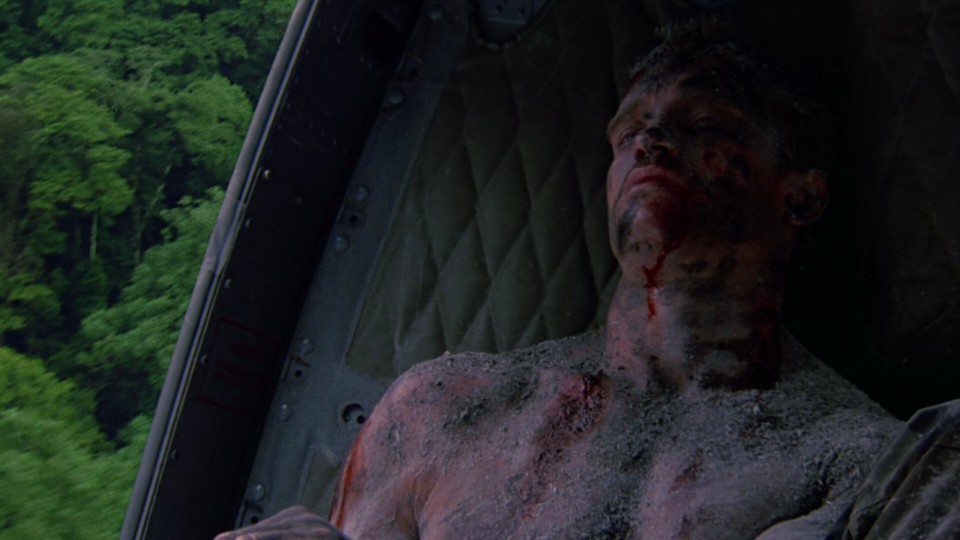 Every year I watch it, Predator tricks me. I’m always shocked at just how marvellous it is. In the intervening months I write my love of it off down to pure nostalgia. I remember watching, with my cousin, a pirate VHS of spines being ripped out, the hardest cast in cinema history unloading magazine after magazine into a forest and a mask coming off so one ugly muthafucker can finally be revealed (brilliant and iconic Stan Winston creature design that is hard to believe was a last minute rush job). I must have been 10 if I was a day. I was blown away, this was illicit stuff. The kind of wild, wild adventure nasty you did with your Action Force toys when no adults could overhear. Stuff that would get you sent to a child psychologist these days as you gleefully introduced an out of scale He-Man villian action figure into the mix and watched the heroes suffer the carnage. When it eventually came out to own, (big long release windows back then) I bought Predator from Variety Video in Greenford for £9.99 rrp and my video collection had begun. But watching it through the jaded eyes of an adult, for what must be at least the 30th time… Fuck me, it holds up. The action is fantastic; an assault on a compound has to be one of the greatest fictional war sequences ever filmed, the laying of the traps by Arnie’s beleaguered squad has a Boy’s Own quality that belongs in a film of a different era (in fact the middle of nowhere setting and high quality cinematography give Predator a timeless, undated feel) and that long teased chase through the undergrowth as the survivors are picked off one by one or make their individual final stands is like an orgasm after an hour of sweet lovemaking. We have not even got to a lone mud covered Arnie’s taking the battle to the freak with nothing but a bow, an arrow and a bonfire. Violent, gripping, taut. Considering acting is most of the cast’s second professions (a rag tag bunch of bodybuilders, wrestlers, screenwriters and whatever the fuck Sonny Ladham is) the performances are compelling. Dialogue is spoken off to the middle distance in curt instructions or haunting monologues (Blade Runner and Unforgiven’s David Peoples did a late pass on the script and blips and burst of such quality are evident). Both Carl Weathers and Bill Duke put in far better craft than such a throwaway premise deserves but it is Arnie who walk away showered in glory. This is possibly the only time he has played a believable human. Not a killing machine or a comic exaggeration of the Schwarzenegger brand. His Dutch interacts like an actual person, shows subtle unspoken emotions, conveys the terror of the situation (even more effectively considering his in-his-prime 1987 muscular build and proven badass reputation) and then we have that shellshocked last shot. Arnie (childhood hero, unbeatable force) has survived but he hasn’t won. Cue up one of the most underrated movie scores ever, we are leaving Val Verde listening to Silvestri’s bombastic pastiche of militaria and undulating timpani rolls. I doubt Dutch would want to go through it all again… But, bloody hell, we do. Action cinema doesn’t come any more engrossing. Movie villians don’t come anymore OMFG insurmountable. Flawless. 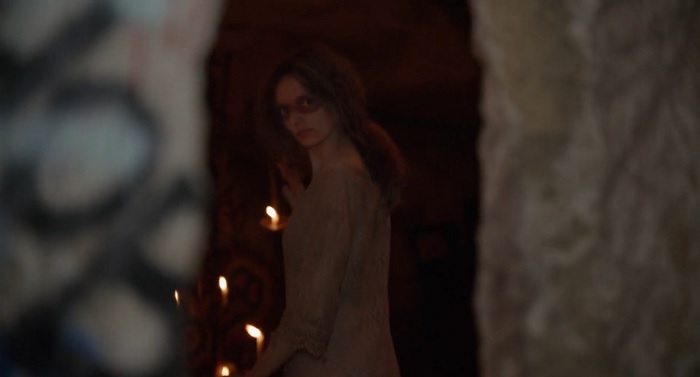 Unlikeable characters, who can only spout their CVs and guessed exposition, survive far, far too long in this weak stew of The Descent, The Da Vinci Code, Flatliners and a lot of ropey old shite. Fittingly it belongs in a sewer. 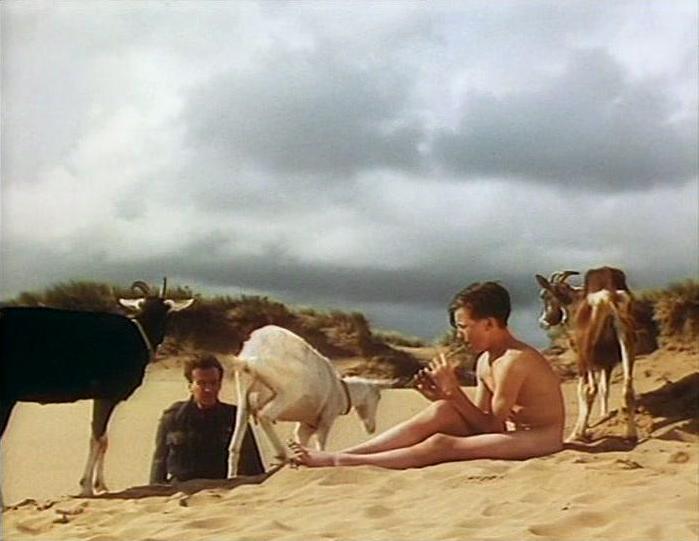 Powell and Pressburger direct David Niven, Kim Hunter and Roger Livesey in this tale of an RAF pilot who misses his death and falls in love during the extra day of life he gains.

Just magical. The stiff upper lift acting of all involved (Niven especially has never been quite so good elsewhere) makes this feel like a love letter found in an ancient treasure chest. Powell and Pressburger play mischievously with monochrome and technicolor, the intimate and the infinite. They are never more than a scene away from an indelible piece of imagery. Their bureaucratic (rationing and ministry era) vision of heaven is economically achieved yet stunningly believable. The plot itself shifts with narrative dexterity; one minute we are quoting poetry in the battle worn cockpit of a Lancaster (like something from a James Cameron film if The King of the World did verse) next we are viewing village life through a camera obscura… then an amateur Shakespeare rehearsal takes place while key philosophical issues are being discussed and culminating in a celestial courtroom where the lead couple barely appear. Utter madness yet never indulgent. The rule book for cinematic storytelling is torn up, then torn up again. The beautiful tatters make a romance classic. This is vibrant, experimental, captivating stuff.

Blindfold yourself. Throw a dart. If it lands on a list of our Jase’s works, then chances are the arrow will be right bullseye in one where he nimbly somersaults (chuckling menacingly) over the low, low, low bar of your expectations. The Mechanic was such a treat, this is not. Only an action sequence at the start – involving hand gliders, cable cars and a brunch grill – has any of the old sparkle. The rest of the plod feels like the never ending sizzle reel for a Mechanic TV show; random episodes’ highlights crushed together into a feature length. The central concept of an assassin who makes his murders look like accidents is retardedly lost in every body damaging barney to make ’em happen. The point where one fight on a yacht is followed by yet another fight on a yacht exposes the artistic redundancy of this. The Stath and Alba work best when eyeing each others’ semi clothed bods, Yeoh is seriously wasted and Tommy Lee Jones puts all the effort in of a man on a Zero Hours contract having to do a surprise half shift when he planned to spend the day in his pyjamas. He is wearing his pyjamas.

David F. Sandberg directs Teresa Palmer, Maria Bello and Gabriel Bateman in this ghoul who can only attack in the dark horror.

A film that coasts merely on the strength of a not exactly original premise, almost belligerently so in its mechanics. No sense of dread is ever generated so the J horror inspired jump scares and narrow “hit the switch” escapes feel fitted as standard rather than any kind of hoot. Teresa Palmer hampers proceedings too. The uniformly good performances from all around her, show up a very wet turn from a “star” in the making. Will we ever care about a fake tan drenched goth who cannot even convey fear effectively? Her poor work matches the creative effort behind the camera put into this  Ronseal movie.

Rodrigo Prieto’s beautiful capturing of the American west; creeks, trailers, warm looking work coats. Gustavo Santaolalla’s mesmerising score whispering in your ear. Heath Ledger’s maturing before our eyes into one of the finest actors of the 21st century with his pent up, mumbling economically, manly turn as Ennis Del Mar. Ang Lee blends these fine contributors’ work, along with many other eye-catching bits of acting, to create one of most grown up and affecting romance films ever made. A true unflinching great of this genre. Still affecting 11 years on. 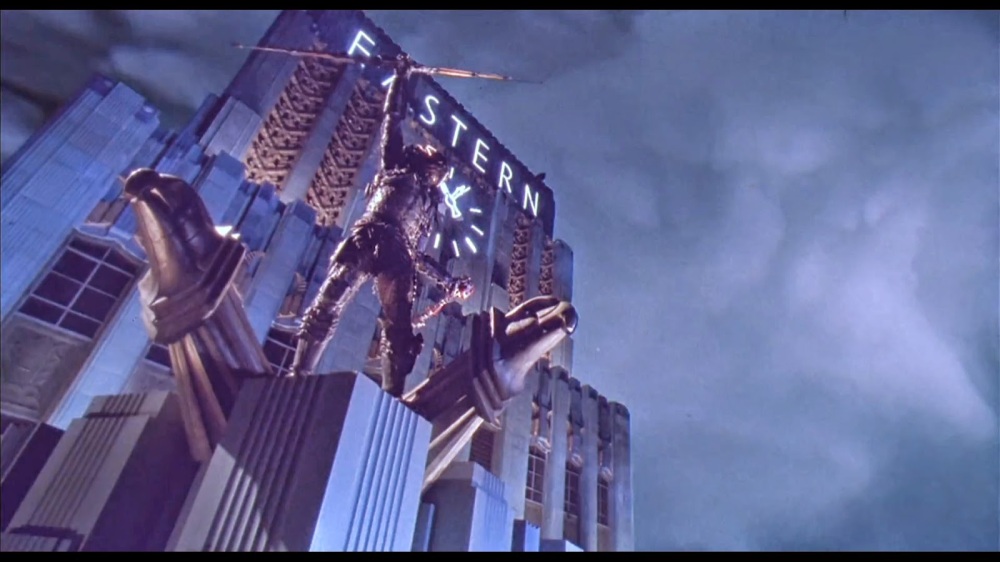 A poster in my bedroom throughout the early 90s, Predator 2 is often mistakenly sneered down on as a watered down cash-in for the standalone Arnie favourite. Sure, it misses the muscular adventure of its progenitor (but satisfies kinetically), the humour seems more forced (the kind of sledgehammer jokes Emmerich and Bay made their own that decade rear their stillborn heads prematurely here) and Danny Glover (he’s perfectly fine) lacks Schwarzeneger’s star mega wattage… But it all works. The action is aggressively full on, the nudity and gore brush provocatively right against the limits of a mainstream studio R rated sensibilities. Proper grind on that barrier. Entertainingly right on the nasty edge. Compelling OTT performances from B movie greats like Bill Paxton, Robert Davi, Calvin Lockhart and, especially, Gary Busey make it buzz with energy. You feel the heat and sweat and chaos of the urban near future imagined. So it is not as tight nor as magical as its beloved starting point. This is still just about as good as a genre sequel gets and that ending is a mind blowing extension of the franchise’s mythology and still untapped potential.

Whenever this is a pure hottie versus shark potboiler (see also hottie versus coral, hottie versus jellyfish) The Shallows rocks – simple pleasures bombastically delivered. Collet-Sera isn’t a subtle director and this is all the better for it. The establishing  chilling with the locals, surfing footage, and obligatory “get em out of the way early doors” bikini shots are handled with zim, while the threat out in the water is teased away at. Problem is the multi strand empowerment story bolted on… leaving Lively chatting with a seagull about her dead mum, her abandoned career choice as a doctor and whether she should spend more time with her family a little too often – cringe. It hobbles the non-shark attack and non-swim for your life sequences down to a halt. This should be B movie heaven but whenever it stretches for self importance it thrashes wildly out of it’s depth. Shame as in the set piece stakes The Shallows genuinely is the most proficient shark flick since Jaws.

Now this I really liked. An unusually engrossing mixture of The Game and Adventures in Babysitting, Nerve has so much going for it. The aesthetic owes a lot to Danny Boyle; all neon colours, shimmer and inventive angles and POV. The set pieces escalate nicely too; here’s an experience that captures the varying rushes of kissing a stranger, shoplifting and riding blindfolded through midtown traffic by keeping the characters involved equal parts believable, motivated and appealing. Emma Roberts and Emily Meade both stand out with charismatic turns, though like everyone here (much of the cast play adults in Orange is the New Black) they now possibly are all a little too old and established to be playing high school seniors. Only the dismount lets itself down; too neat and too preachy. The conclusion it reaches might work as a powerful point in a YA novel but visualised onscreen it lands flat. The Famous Five hackers, passive mom and baying mob’s eventual reaction all ring false in a way that really grates against the intense fun we had in acts 1 and 2. Still as Bubblegum Thrillers go (Nerve may be the first) there a hella lotta great in the 80 minutes before to outweigh that stumbling exit on the quality scales. 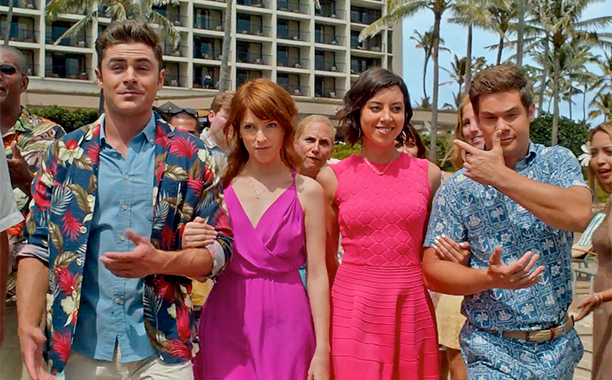 5 minutes before I had low expectation, 50 minutes in I had been completely won over, then an hour later this throwaway chuckler had really, really, really outstayed its welcome. Efron and Devine have great comic chemistry together and they are constantly foot on the gas, hitting jokes whether the script has gifted them or not. The girls lack the same energy with only little sister bride Sugar Lyn Beard staying in the memory a fortnight down the line. The problem is everyone (EVVVVEEERRRYYYYYYOOONNNEEE!) is given an arc of self realisation then failed redemption then actual redemption. Like half a dozen characters worth of this shit. The jokes dry up, the goodwill shrivels… then two musical numbers and an outtakes reel!? A surprisingly fun night out seems to have moved in and is squatting in your living room. Just end. Shame as the foundation was colourful and strong.