I was under 18 when I went to see Se7en at the cinema. And Se7en is the epitome of an 18 certificate film. Subliminally installing images of knife strap-ons and exploded guts and severed heads into your mind while brazenly plunging you into a rain sodden cityscape that might as well be hell. I went with my parents. David Fincher said in an interview at the time he wanted to make films that scar. Films like Jaws, that stay in your fear receptors years later. That even if the movie flopped, he hoped that some 21st century kid might catch it late night and tell their friends about the old movie they saw that ended with a surprise head in a box. The severed head.

Fincher was justified in his fears of a flop. This was his first project after the nightmare production of Alien3. A gruelling Hollywood baptism of fire that saw him be sacked three separate times on set, have his footage reassembled by producers and spend a year of his career a pariah, a period about which he still will not comment on in public to this day. Se7en was his second movie but his chance to reboot his reputation from scratch. Smaller scale and with a cast who could use their clout to keep his vision true from executive compromise and back pedalling. Visually, it is a similar film to his Alien entry. Industrial gothic. Beams of holy light piercing into caves with sweaty walls and crumbling utilitarianism. Antiques and faulty tech littered around unloved workspaces. Oblivion with a Nine Inch Nails soundtrack.

This time his vision captured the general public’s imagination, Se7en was a modest smash and Fincher would go on to refine and control his precise, pessimistic cinematic style in classics like Fight Club, Zodiac and The Social Network. Those films slowly became more prestigious, his reputation as one of the few living greats grew with each masterful release. Se7en isn’t one of those grand, important, sophisticated awards bothering movies but it is his finest. An obscene mystery movie that pounds you with it constant bleakness and dazzles you with its revolutionary twists.

There’s only one action sequence. A foot chase that appears from nowhere but bruises and shudders you. Unlike the stunt led spectacular set pieces of an Arnie or Harrison Ford flick from that era this isn’t about a hero surfing the impossible but a human trying to avoid the probable. Every corner Detective Mills turns, every door and window he darts through, puts him in the crosshairs of a man who has proven how little he cares for human life. He stumbles, and slips, and careens towards the embodiment of death itself. Doggedly in pursuit of a villian he does not understand. It is a breathtaking break from all the world weary reviewing of the fanatic’s gruesome work. Much of the narrative is passive. Freeman’s marvellously resigned Somerset sums up Se7en’s core mode.

All we do is pick up the pieces. We take all the evidence, and all the pictures and samples. We write everything down and note what time things happened…

We put it in a nice neat pile and file it away, on the slim chance it’s ever needed in a courtroom. (pause) It’s like collecting diamonds on a desert island. You keep them just in case you ever get rescued, but it’s a pretty big ocean out there. 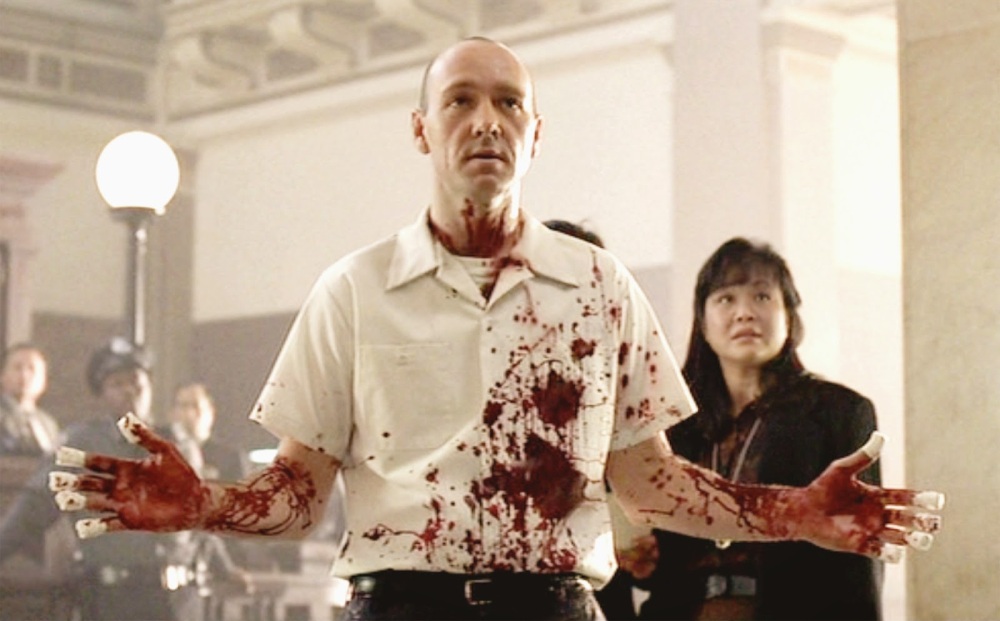 The performances are, in general, excellent. After having his cast prescribed to him for Alien3, Fincher clearly revels in filling his shot at redemption with distinctive turns. Most only have a scene or two to impress. R. Lee Ermey, John C McGinley, Richard Roundtree all add a gruff masculinity to their disempowered men of action roles… like Mills they want resolution and justice but have no practical answers to John Doe’s crimes. Morgan Freeman’s apathetic lead detective is electric. Trying to drown out the chaos and the degradation of the city he lives in. Apathy as a survival mode. The one chink in this perfect movie’s armour is Pitt’s Mills. He’s a little too twitchy and mannered here. Pitt goes big and aggressive, a good opposite to Freeman’s composed protagonist and fitting with his character’s ultimate fate. But it is nowhere near as nuanced and relaxed as his effortless partner. Gwyneth Paltrow mainly sleeps and looks angelic until her time to shine happens off screen.

And then we get Kevin Spacey… discounting his obscured appearances earlier on, his third act arrival into the movie is one of the best played hands in genre screen writing. “Detective. Detective. DETECTIVE! You’re looking for me.” The whole movie resets around his otherworldly enigma of a performance. We even get daylight. Just who the fuck is John Doe? Do we judge the man by his methods or his honesty or his success? In just 15 minutes of shackled, restrained screentime we stare true dogmatic evil in the face and he sneers right back at us, self amused and smugly triumphant. I’m surprised Anthony Hopkins didn’t FedEx Spacey his Silence of the Lambs Oscar the day Se7en wrapped. I guess the delivery man was busy.