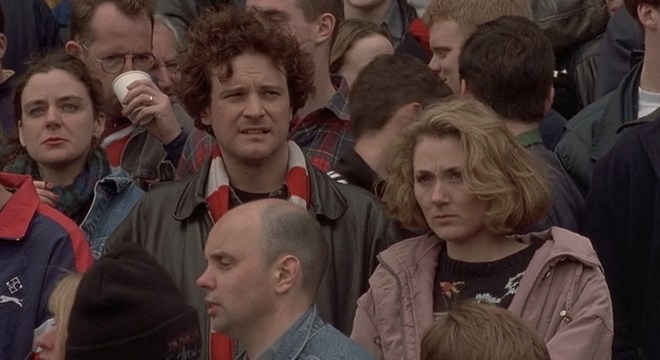 David Evans directs Colin Firth, Ruth Gemmell and Mark Strong in this romantic comedy where a career orientated teacher falls for a loutish football fan who can’t commit to her over his Saturday fixtures.

Something of a forgotten gem among the Brit-Rom-Com period of the late 90s, this to me is the best of the cycle. I was never really into football as a kid. My Dad, uncles and cousins brought me along to all the QPR home matches but I very rarely got caught up in the games. I’d spend the 90 minutes distracted by the programme, the occasional Roy of the Rovers comic they gave out or resting my forehead against the icy cold handrail of the concrete terrace. Football was unavoidable as a kid in the UK, you were defined by your ability on the playground, your team and your Panini sticker collection. I only really excelled at the latter two… QPR were going through a rare First Division golden patch -the Guinness sponsorship made the strip look extra cool- and I liked collecting stickers (though preferred the movie and TV based ones – my Thundercats collection rocked).

Based on Nick Hornby’s memoirs, Fever Pitch often gets being a football fanatic in that era bang to rights though. The crush of match days, the squeezing through the turnstiles, the chanting on the harsh grey unseated stands. I guess the tribal sense of belonging, the testosterone laddishness is more seductively captured here on film than the reality. The movie’s rose tinted view of the early nineties on the terraces takes in Hillsborough with sensitivities but avoids the unwavering paranoia I felt as a child that it could all kick off at any moment. The unease felt over constant presence of riot gear and police horses on Loftus Road, the dread over pubs you shouldn’t walk past on match days are primal emotions still embedded in me from those Saturdays in White City. Although it was a world I never fully embraced, it was one I was in a few weekends a month until I grew into the things that defined me… music, films, girls. These are Hornby’s other touchstones, explored more thoroughly in High Fidelity. A favourite of mine in my twenties, book and film. Yet I still have a soft spot for Fever Pitch. Maybe because its underlying message is footie is something you should grow out of if you want to succeed with the fairer sex.

The gender politics of the film aren’t perfect. Hornby avatar Paul is stereotypically immature and insensitive. A man child. He hasn’t grown out of the sense of belonging match days with his absent Dad (Neil Pearson -standing out in a small but well sketched role) gave him. He likes the comforting regularity of the football year. The predictable annual cycle of matches that means he won’t be abandoned by Arsenal. If he wasn’t such a good teacher and played by Mr Darcy himself you’d struggle to see why we as an audience would root for him to grow up and get his act together. Firth brings a natural charm to him, even in Paul’s more petulant moments, and he actually reminds me of a few of my leather jacketed, shaggy haired A-Level teachers. Men who probably always saw working in a college as a means to supporting their hobbies rather than a vocation but connected with the pupils better than the career teachers. Fag break legends.

Ruth Gemmell has a harder schlep. Her Sarah can be a bit of a demanding shrew as written. It is difficult to figure out what she sees in Paul apart from proximity. She wants to change him for the better. But surely there are less demanding renovations? Luckily Gemmell is sexy and believable in her performance. She convinces there is some glimmer of hope in the mismatched pairing. You want them to work for her sake. She’s worked consistently since 1997 but this is probably the role of her that resonated most with the general public. She’s helped by a banging soundtrack of earlier 90s hits that sweep us along the rougher patches in their relationship and gives the street party finale a real sense of celebratory magic. You’ll leave Fever Pitch with a big smile on your face, surprised they’ve pulled such an unlikely, slightly dated will-they-won’t-they dynamic off. Goal!