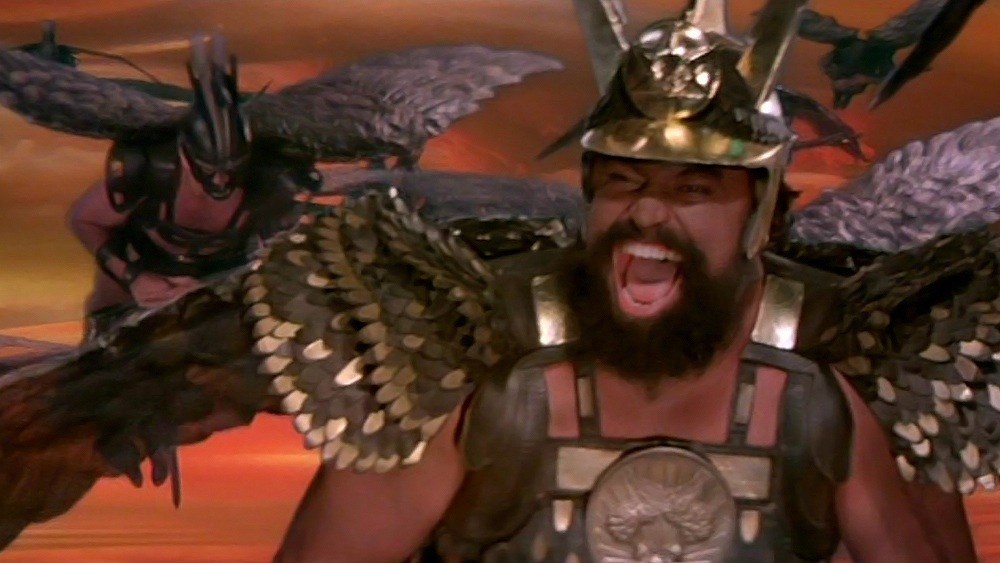 The sauciest space adventure my generation ever got warped by. Even the ink spill vortexes, penis shaped rocket ships and drifting backing tracks have the slow hump seductiveness of a kinky night in a themed hotel. All the sex slave imagery and barely concealed flesh passed me by as a child. Back then it was a more colourful (gold and crimson and primary neon dominate), more gung-ho, less hippy dippy Star Wars. I couldn’t see that this was less well crafted, just like Star Wars is less thrilling. That Queen soundtrack pumps you up and keep you stomping, that cast of British cult actors ham it up shamelessly. Alec Guinness and Harrison Ford both looked down on their biggest hit, whereas the Flash Gordon gang seem to be having the time of their life. The fantasy pantomime is infectious. You get ensnared by the camaraderie of the goodies, gripped by the ticking clock and cheer when an impaled baddie melts or dematerialises. There are iconic moments… Brian Blessed bellowing every line, Topol’s experimental montage brainwipe (one of the most daring cinematic sequences to be hidden in a kid’s blockbuster) and the BDSM execution of Flash. There are daft moments… the gridiron brawl in the throne room, the bland romance, Flash’s triumphant leap at the camera when they don’t know how to end it. But they do know how to end it. A cackling cliffhanger for a sequel that never came; see also Doc Savage and Masters of the Universe. Forget Marvel and Aquaman, this is one of the purest, greatest, unabashed comic book movies ever made. “Just a man, with a man’s courage.”