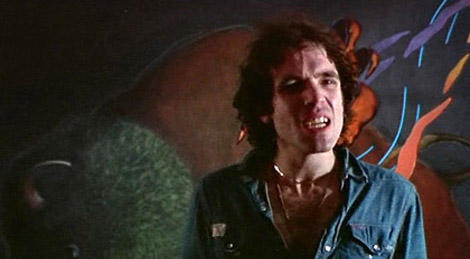 Abel Ferrara directs himself, Carolyn Marz and Baybi Day in this exploitation horror about a struggling artist in the New York punk scene who takes up power drilling homeless people.

The grungy crossover point between Taxi Driver and American Psycho. Only this troubled New Yorker does actually kill, kill and kill again while the others two are essentially dangerous fantasists. Even then, one rampage, spree night aside… a whole lot of The Driller Killer’s runtime is devoted to alienation and the pressures of urban living rather than saleable gory nastiness. Our eponymous anti-hero can’t make rent, can’t connect to his girlfriend or her live-in lesbian partner, can’t finish his masterwork of a bull in a maelstrom, can’t stand the New Wave band The Roosters who have moved in downstairs. He’s good at pinball, knocking around a helpless ball between violent flippers and bumpers. We are teased for a long old time… disturbing nightmares, actual DIY, red paint being stirred, adverts for portable power tool batteries. No drilling killing though. When he gets down to getting rid of his frustrations on a bum it feels like just another shitty occurrence in his busy week of misery. Ferrara starkly captures that grim Big Apple that no longer exists. A hellish urban island of desolation and hedonism. I watched this in a double bill with A Bucket of Blood. It could easily have been paired with The Bad Batch. Down and dirty, not for everyone, disposable.