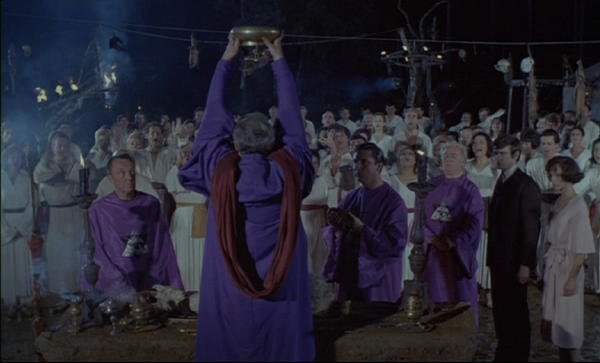 Terence Fisher directs Christopher Lee, Charles Gray and Nike Arrighi in this tale of a group of friends trying to rescue a mate from the grip of a cult of devil worshippers.

Probably the best Hammer horror ever made with both a relishable Lee front and centre, a brilliant final half as the heroes try to survive a series of diabolical attacks inside a chalk circle AND a time slip. The appearances of the devil and daemons are well designed, cleverly fleetingly deployed (the less we read into the first one being a staring middle aged black man in his swimming trunks is likely for the better though). Sure, sure… it suffers from the shonky charms of all Hammer productions – entire scenes exist merely because a country house and sitcom actors were available and it will all appear very dated to unloving eyes. Get caught up in its overwhelming positives though and it’s an imaginative, sexy and propulsive sixties horror.