Tony Scott directs Denzel Washington, Dakota Fanning and Christopher Walken in this brutal actioner about a washed up bodyguard who unleashes hell on a syndicate of Mexican kidnappers.

Keen visualist Tony Scott worked five times with Denzel Washington on manly, glossy sweaty thrillers and Man on Fire is easily their best collaboration. It is a heady brew of platonic romance between killer and child, really nasty ultraviolence, and frame fucking intense storytelling (subtitles emphasise points with an unusual smoke in a bottle beauty, shots blur and judder into each other like the film has been edited in a food processor). It is a genuinely tough movie, despite devoting an hour to Washington and Fanning bonding, that by close of play feels almost mythic in its stature and effect on the viewer. It is also one of the very rare films where Denzel actually chimes with his co-stars, who would have guessed he and a hyper-relaxed Walken (a gorgeous support turn, funny and touching) would make such convincing old friends?

Chris Renaud and Yarrow Cheney direct Louis C.K., Kevin Hart and Lake Bell in this tale of a pet whose idyllic life is tuned upside when a new dog is introduced to his happy home but they eventually have to work together when they find themselves locked out and lost.

I watched one of last year’s biggest hits with my 5 year old niece. 10 minutes in, I told her “It is just Toy Story with dogs” but she corrected me and told me “It is not Toy Story.” Half an hour later we repeated the conversation. And then again at the end. And she was right, it is no Toy Story… that had magic, hilarity and set pieces that generated palpable excitement. The Secret Life of Pets is not Toy Story.

I’m going to lay my cards right out on the table. After three blissful viewings I think Rogue One is the best Star Wars movie ever made. No qualification… BEST EVER. Yep, better than that one… and that one… honestly, even that one. A World War II style men on a mission afternoon killer with all the technological wonder and comforting mysticism of the franchise that defined a generation. Emotionally engaging, with a propulsive narrative and a top to bottom excellent new cast. Jones’ tough Jyn Erso is a genuine surprise (all grit and unwavering stiff upper lip), Mendelsohn adds another awfully seductive villian to his tally (this time with a cape), Alan Tudyk’s K-2SO is a paranoid android laugh grabbing treat, but it is the double act of Yen and Jiang Wen that steal the show. The Guardians of the Whills kick ass, take names and add a touch of human sparkle while all the war children are booting up and signing off. Human sparkle is what Ford, Fisher and Dee Williams always brought to the otherwise often po faced spacemonk or droid-centric franchise, and in this, the most self consciously serious episode, the little magic our loveable Kung Fu odd couple sprinkle with every interaction goes a long way.  Actionwise we get mere smatterings until the main event; a 45 minute, three different arena, battle around Scarif. I won’t spoil the pleasures and shocks here just yet but suffice to say it is unlike anything you have seen before in a family film owned by Disney. And while you witness these brave new things you also literally see the series mature from kid’s play to adult endeavour before your very eyes. And also a Space Monkey firing a laser milligun out the side of a galactic gunship (“Just like fuckin’ Saigon, hey slick?”)! AND THEN we get bonus Darth Vader, in a blistering sequence that even the most casual fan of the Force will sit bolt upright in their seat to fully enjoy. A Star Wars film that finally delivers on both those words, a crowd pleaser that rarely feels like it is making any compromises for popularity, a full-on eyepopping, heart wrenching big screen delight. 2016? The worst year ever? Only if you live in the past. I ended it saving the dream. Saving the rebellion. An amazing prequel, not living in 1977’s long shadow but still giving us A New Hope. Not just the next step to those familiar pleasures of Episode IV but the potential that Star Wars doesn’t just boil down to past talents looking for a last paycheck. We don’t need Skywalkers, Solos or Kenobis for Lucas’ franchise to be at its very best. Now that is revolutionary.

Roger Moore was my Bond growing up and while I can see everything wrong, dated and daft about his entries in the canon it doesn’t change the fact he’ll always be the purest distillation of what 007 means to me. And the great thing about TMWTGG is it takes everything “wrong”, “dated” and “daft” about this period and plays those notes as loudly as possible. Goodnight’s desperate incompetence, all the jokes at little Nick Nack’s expense, the improbable return of Sheriff JW Pepper (let’s just accept he’s gone on an surprisingly exotic vacation to Thailand… but why would he be test driving a new car on it?)  and that time the school girls take down an entire dojo then leave poor Rog behind as their car spins off into the dust just so we can get a bonus chase sequence. Those bits are just as fun as all that genuinely does work; Lee’s brillianty oily Scaramanga (his best performance?), Lulu’s freakout theme song, the surreal secret base in the harbour shipwreck, Maud Adam’s trapped moll, both visits to the funhouse death maze, the enjoyably intense finale, the bikini Goodnight wears while fucking up consistently during the intense finale, and Roger – ever the gentleman – treating the whole thing with the same effort and poise as a man accepting his caviar delivery from Harrods while on a phone call. Brilliant stuff!

Ever wondered what would happen if Clint starred in a Police Academy rip off? Wonder no more. A terrible film, albeit intermittently entertaining, with a discordant A grade Clint performance at its centre. Marine Sgt. Thomas Highway is a terrifyingly likeable creation, one of Clint’s best, so much so he all but repeats the brilliant schtick in the far more accomplished Gran Torino decades later.

Clint Eastwood directs Tom Hanks, Aaron Eckhart and Laura Linney in this fractured look at the life, fears and heroics of Chesley Sullenberger’s January 2009 emergency landing of US Airways Flight 1549 on the Hudson River.

“Birds. Birds. Birds.” This is a classy affair carried by Hank’s easy charm and Eastwood’s assured direction. But the fake drama of an inquiry that is only going one way, the emergency ditching visited over and over and over from differing perspectives and the weak punchline ending highlight that there really is only a few minutes of story here. An expert took his years of experience and landed a plane in a way few others could saving 155 lives. Sully deserves a film but the process itself took 208 seconds (we are repeatedly told) and 208 seconds does not 90 minutes fill. And as those additional 86 minutes roll on with flashbacks, nightmares, calls home, references to the 2008 economic crash and footage of real survivors cuddling the real Sullenberger… well… Sully sinks under its own padding. 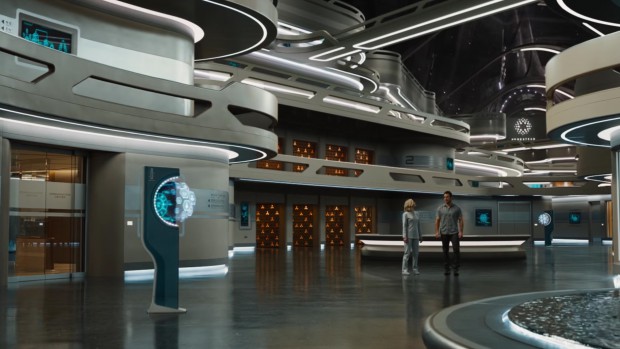 Ah… take a handful of Titanic, Mr and Mrs Smith, Event Horizon, Wall.E (Wall.E?!), The Shining (THE SHINING!?!?) and pour over the two coolest stars and you get this… a mish mash with occasional interesting spikes. Swinging wildly from funny to introspective, action adventure to sexy romance, ethical debate to FX fest, Passengers tries to please everyone without ever really doing enough to satisfy anyone… except me but then again I’m a sucker for a bit of smooching and a bit of stardust. So if you are put off by Pratt’s decision to crack open the hypersleep pod of the yummiest face on the ship, then sadly there really is not and could not be enough meaty chew to win you around. If you came for futurelit bods shimmering against each other then sparks just about fly adequately in the middle section – the ever watchable Lawrence has never been saucier. And if you came for outer space action, then you have to settle patiently for some slick production design until the final clunky but engrossing 20 minutes of explosions and heroic sacrifice. In all honesty, I was charmed by the pretty stars, the even prettier starcruiser and the diverting disaster that eventually emerges. I came for frothy, beautiful entertainment and Passengers, at a squeak, delivers. Pratt waking Lawrence up (out of necessity in more ways than one by end credits) doesn’t feel quite as harsh a moral dilemma for the viewer to forgive as Winslet not pulling DiCaprio up onto her kingsize wardrobe… but I only care if a movie is worth watching, not if its gender political content is currently palatable, so what do I know? 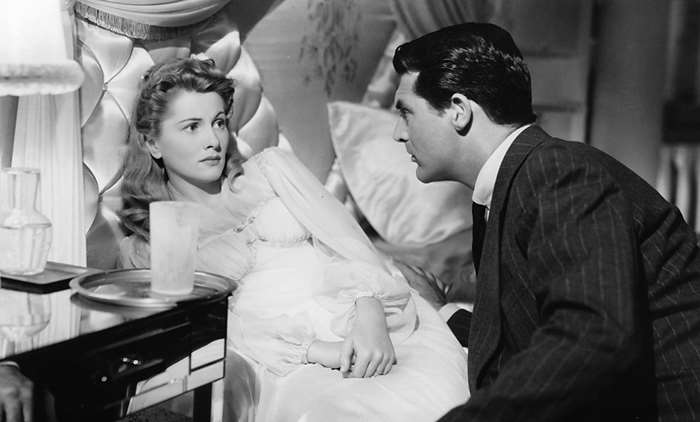 Alfred Hitchcock directs Cary Grant, Joan Fontaine and Nigel Bruce in this thriller about a newlywed who fears her playboy husband is plotting a murder… possibly hers.

Silver grade Hitch; starry, classy and full of keen visual innuendo but perhaps the plot is spread a little too thinly over the running time and the ending is (rather pointedly) coyly abrupt. Joan Fontaine is compelling as the honeymooner who slowly realises the cage she is trapped in. 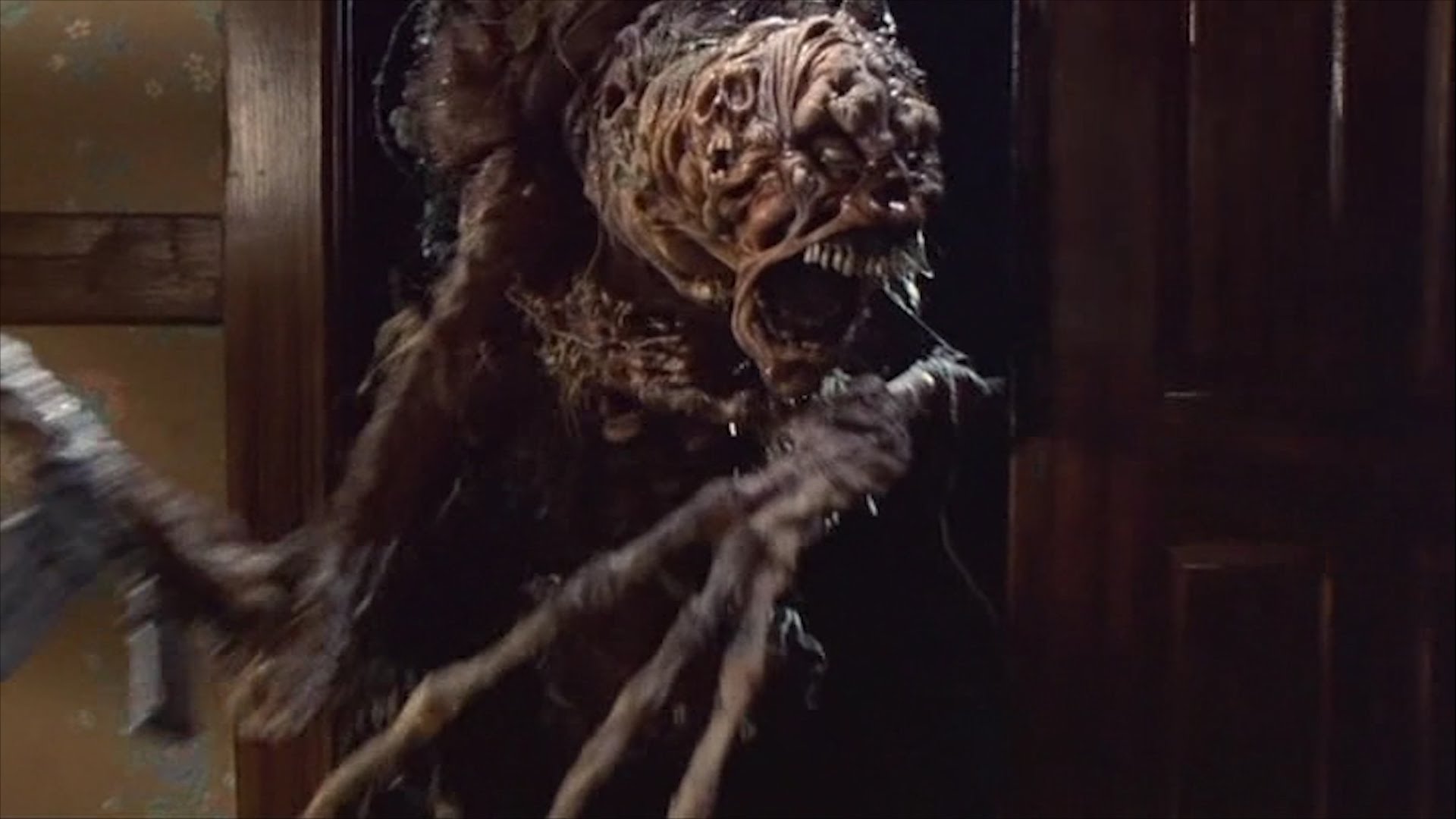 Steve Miner directs William Katt, Kay Lenz and George Wendt in this horror comedy about a slasher writer who inherits a unhinged property.

Absolutely all over the shop but never dull. One scene will drip with sitcom farce, the other with fantastically gooey practical creature effects work. Nam flashbacks share running time with a man fighting a wall mounted marlin. While it never marries its smorgasbord of tones as well as say Evil Dead 2 or Beetlejuice, there’s enough fun on offer that you look forward to another viewing of the schizophrenic thrills of House almost as soon as the credits roll.

Scripted by Roald Dahl, this is cunning mix of twisty cliffhangers and PC obliterating swagger (dated sexism and racism the way only Bond can seemingly make palatable). It is also one of my favourite action thrillers. There are stylistic risks taken here not quite dared again in the series until Quantum rears its divisive head; the incredible yet minimalist one shot rooftop barney, Little Nellie’s elegant flight, the opening death of the Commander himself, that other shock murder of an untrustworthy character, the pop art grand finale of ninjas versus henchmen in a fucking volcano. Budget excess, sugar rush storytelling and cinematic confidence. Forget Jaws, the modern blockbuster was born here.