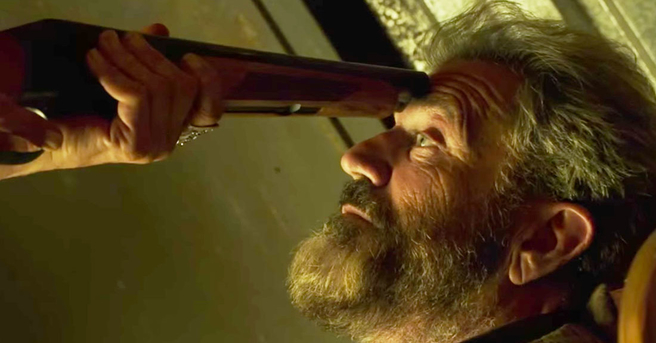 Jean-François Richet directs Mel Gibson, Erin Moriarty and Diego Luna in this thriller where an estranged ex-con father and junkie daughter go on the run from a cartel hit squad.

Despite Mel embracing his advancing years (grey, grizzled and growling are the order of the day) this could have come out in 2002 -before controversy killed his box office power –  and easily carried on his $100 million plus powerhouse reputation. Mel was the King of the violent but emotionally aware action flicks back during his reign and Blood Father has all that unhinged charm and mad dog mayhem which even his classiest entries showcased with aplomb. Bottom line: If you own a Lethal Weapon or Mad Max boxset, then get ready to be entertained thoroughly. The set-up of Daddy saving daughter might reek of Taken (and there are worse things to smell like) but the heft of the journey seems closer to Leon or Matchstick Men with reprehensible father figure teaching his Lolita-esque ward some nasty but essential tricks of the trade. And just as Natalie Portman and Alison Lohman laid foundations to stardom in those breakthrough roles, Erin Moriarty proves almost as equally as interesting as Gibson here. I say ‘almost’ as to be honest the long awaited (by me) Mel comeback starts here, nothing else can be of any import for a boy raised on him. This hits the same nostalgic notes for me as The Force Awakens does for many. Whether he picks up a Mad Max motorbike, shaves and scrubs up to look like Payback’s Porter, or goes nuts and mouth savages a baddie’s ear a la Riggs, this lovingly repackages every aspect that made 80s and 90s Mel brilliant in a foul mouthed, self-aware, sensitive yet down and dirty thriller that will keep modern audiences gripped. A bruisingly fun night out.