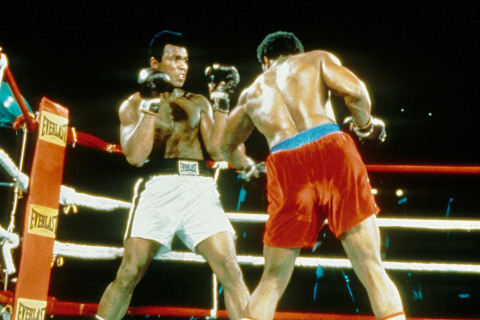 Leon Gast directs Muhammed Ali, George Foreman and James Brown in this fly on the wall documentary following the boxers, promoters, press and musicians trapped in Zaire waiting for a delayed championship bout to be fought.

A vibrant collage of the seventies black American entertainment scene transposed to exotic surroundings with some frankly magical boxing and live music footage taking centre stage. Just lots of fun as various icons alternatively print their own legends direct to camera or laze in hotel lobbies together, none less so than the captivating Ali. Perhaps only the old white men writerly types of Norman Mailer and George Plimptom “talking head”ing retrospectively suck out some of the magic. Their yen to author the narrative when the assembled footage sings it own beautiful tune makes for annoying interludes.