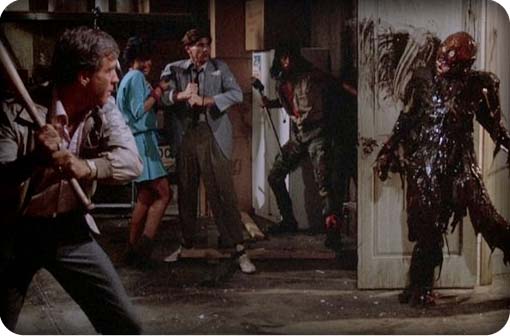 Joining Kundun one night this week in an accidental Ressurection double bill was a flick that had a very palpable effect on my own childhood. The video cover, at least did,  of Tarman and the gang. Rotting faces leering directly at me, just like Freddy hand drawn but menacing, really got at me as a kid. Terrified me enough to keep me away from my beloved videoshop when I was wee and still out and as far away from the horror section even as eventually I got older but brave enough to venture in to the rental palace where my movie loving tastes formed. No longer anywhere near youth and now a horror fan,  I’d retroactively heard good things about Return since and was eager to catch up with it. And this belated watch proved gleeful if not life changing. It is a knowingly daft and outrageous film. The FX, gore and nasty is just about right, albeit never actual terrifying. The humour manages to be constant, inventive but palpably lacks punchlines. All very of its time, amusing but never amazing. The highlight among some spirited performances is Linnea Quigley who quickly loses her punk clothes (all of them) and then her life and then keeps on chomping as a nudie zombie. Touches like her still don’t make Return of the Living Dead any more than a time waster for sure, but at the very least a lovingly made, grungily frantic time waster. If you like ReAnimator or American Werewolf in London and come to it with lowered expectations it hits a spot no longer catered for.