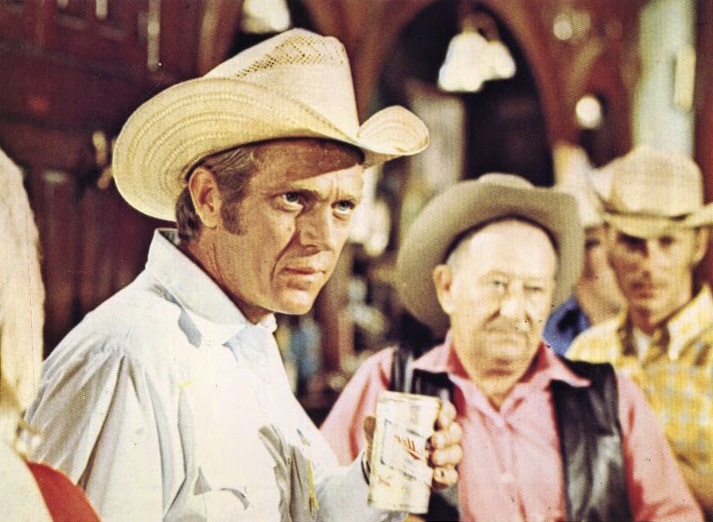 Sam Peckinpah directs Steve McQueen, Ida Lupino and Robert Preston in this modern cowboy drama where an itinerant rodeo rider returns to his hometown to take on the bull that threw him.

Natalie and I went to see this at Lisbon’s Museum of Cinema. Dedicated to retrospectives, they have a top floor with an exhibition of old projectors and lobby cards. The downstairs has a dozen worn out leather armchairs for the regulars to wait in, siesta before the film. You could spend the rest of your life there. A retirement home for the cinephile. This was screened as part of their Ida Lupino season and I was keen to revisit the film. I probably hadn’t seen it in twenty years. The cinema itself was wood panelled and well tiered, there was an extra little letterbox screen below the picture to project digital Portuguese subtitles. When You Wish Upon a star was played over the speaker for a few bars, then a warning doorbell… thirty seconds… another bell. Like a rodeo. Lights down, we’re off… the print was crackly, worn, faded with Denmark subtitles. Double subs. The movie was as fine as I remembered – good humoured and manly. Peckinpah with his foot off the pedal. A dusty, elegiac look at changing life in the West. The lonely, endless scrabble that belonged solely to the cowpuncher and the prospector is becoming motor homes and airports. The eyeless man in the bulldozer tearing down history don’t care if you are in his way, he’ll push your freedom and rights off the road. You can’t play chicken with progress. Your brother will sell out the family birthright for a buck, make a TV commercial bragging about this but accepts being punched through the porch window as comeuppance. The wild and charming devil of a father (a fantastic Preston) sees Australia as his only option, America just is too boxed, too sold off and too fenced in. Ida Lupino is the stately abandoned matriarch in gingham and denim. Bonner himself is a motel cowboy. McQueen’s steely blue stare taking in how his world has changed, his family has separated yet he only really cares about staying on the bull for eight seconds. An Independence Day parade, a grumpy dog, a bar fight, a little unjudgemental but jaded romance for young and old. A grand piece of cinema, about as thoughtful and as sensitive as a beer and pizza flick gets.